“Forget safety. Live where you fear to live. Destroy your reputation. Be notorious.”

Since she was a small child, Sandra is happy when she is dancing. Eagerly she learnt classical ballet and jazz ballet, later Hip Hop. At the age of 20 she discovered the Chinese martial art Taiji Quan. She practices the art form more than 10 years under her teachers Master Chen Jumin, Mike Sigman, and Grandmaster Zhu Tiancai. She volunteered to build up a non-profit Taiji society and worked as a Taiji instructor. In China she took part in an international Taiji competition. Later the skills to move the body in a permeable and stable way, which she has learnt from the martial art, would be of great support.

In 2007 Sandra watched an Indian dance performance by Senthil Kumar, a Bharatanatyam dancer based in Vienna. The energy and vitality of the temple dance from Tamil Nadu completely captivated her. Impressed by the exact execution of the dancer’s movements, who was trained in Kalakshetra in Chennai, the leading institution for Bharatanatyam, and fascinated by the expression in his dance, she looked for Indian dance schools in Munich.

She finds Natyadhara − Zentrum für indischen Tanz und Kultur, without knowing that the owner Chandra Devi is a highly skilled Bharatanatyam dancer and teacher, who was trained in the traditional way by Smt. Shyamala Surendran, founder and head of the well-respected Dharani School of Performing Arts in Cochin, Kerala. For two years Sandra practiced Adavus, the basic movements, and Mudras, the hand gestures, several times a week under Chandra Devi.

In 2008 Sandra traveled to Kochi for the first time to intensely take lessons from Shyamala Surendran. A visit which becomes a beloved yearly habit. India and its people opened her heart. During the following years the Bharatanatyam enthusiast learns a complete repertoire of traditional choreographies in Munich and Cochin. She studies Abhinaya, the expression, which along with the Mudras is used to tell the Hindu myths in the dance items. A fascinating journey into Indian philosophy and culture had begun.

Shyamala Surendran is rooted in the tradition of her Gurus V.P. and Shanta Dhananjayan and Kalanidhi Nayaranan. The three of them are luminaries of the classical dance Bharatanaytam, who are honored with the Padma Bhushan Award, the highest prize in the field of the performing arts. Mrs. Surendran, who herself is awarded with prestigious prizes, is well-known as a brilliant artist and choreographer as well as for her leading dance school Dharani and her festivals which are covered nationally in the Indian press. In 2019 she is bestowed with the Future Kerala Educational Excellence Award for the high standard of education in her school.

In 2009 Sandra started to learn Mohiniyattam from Shyamala Aunty, a temple dance from Kerala, which is only danced by women. The teacher studied this graceful sacred art form from the famous dancer and poet Kalamandalam Kalyani Kuttyamma, who established Mohiniyattam as a stage art at the beginning of the twentieth century.

Through daily dance and fitness training several hours a day Sandra quickly made headway. Simultaneously she learned Indian cinematic dance from Chandra Devi. She attended workshops of different artists. In 2010 she started teaching Bollywood and Bharatanatyam at Natyadhara and feels very gratified by this work. In 2011 she trained the Mohiniyattam group on behalf of the teacher for several months. She helped teaching children at Natyadhara and gave Bollywood workshops in a school. 2012 she completed her Bharatanatyam Arangetram with live music under the guidance of her teachers Shyamala Surendran and Chandra Devi at the Museum Fünf Kontinente in Munich. An Arangetram is the debut of a classical dancer which marks the completion of the traditional dance training which requires several years. An education which demands concentrated work of teacher and disciple.

After a baby break Sandra started practicing intensely Mohiniyattam and studied from Shyamala Aunty in Cochin and from her teacher Brigitta Hegedues, a wonderful dancer, at the Revathi Dance Indische Tanzakademie in Munich. With Aunty and Brigitta she shares the dedication to this gentle art form. The temple dance from Kerala is a peace giving art for her. In 2018 Sandra completed with great success her Mohiniyattam Rangapravesam, her debut in this dance form, under the guidance of Shyamala Surendran and Brigitta Hegedues at the Kulturhaus Milbertshofen in Munich.

Sandra works under the stage name Akhila and performs in shows, cultural events and at Indian festivals both solo and with the Natyadhara- and Revathi performance groups. In the summer of 2018 she presented a full Mohiniyattam repertoire with live music in India. That evening Kala Vijayan, the daughter of Kalyani Kuttyamma, was in the audience. Spontaneously Mrs. Vijayan came on stage and commented about the program: “The dancer understands the deeper meaning in our literature and poetry, and brings out the Abhinaya from the soul. It is a sheer joy to see her infinite talent and hard work shining through this performance.” She stated that Sandra has presented very intricate Talams with great beauty and grace, deserving a 100 out of a 100 marks. In particular she cherished the work of Shyamala Surendran: “It demands a special skill and talent in a teacher. A talent that Shyamala has in abundance.” She appreciates the enormous commitment of her colleague for outstanding education in the realm of Indian classical dance and for the world of art in general.

In 2018 Akhila starts to teach again and is deeply grateful to her teachers and feels blessed that she is allowed to pass on this art with love and dedication. Akhila Sandra Eschenbach is married to André Eschenbach, the Chef of Happiness. 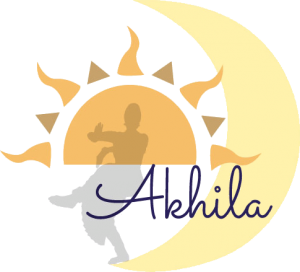